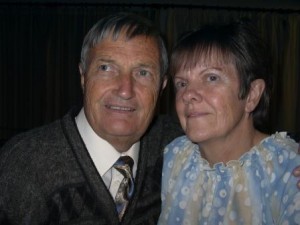 What God works through a person is the coming into being of what He had planned for him before the foundation of the earth. The first major occurrence in this long line of events, is of course the new birth when this person meets with his Creator and enters into the Kingdom of God. So, in reflecting on the founding of Rivoni Ministries, let us start with the founder, Ben Lubbe’s account of how he got saved.

“I was born at Kimberley, in the Republic of South Africa. Kimberley, of course, is where an immense hole in the ground marks the place where diamonds were mined in years gone by. Unfortunately I was not born with the spiritual qualities resembling those glittering gems, on the contrary, I was rather like a lump of black coal, suitable only to be cast into the fire. God had to bring much pressure and trauma to bear upon my life before I would submit to His mighty transforming grace.

On a Sunday night in January 1970, I could bear the pressure no more and knelt down in the dark and gave my life to the Lord God Almighty, Creator of the heavens and the earth, I had just had enough of a wayward life, doing my own thing. I wanted to know the Lord and to walk with Him in intimate fellowship. That Jesus died for me on the cross at Calvary to bear the burden of my sin and procure for me a brand new life by the working of His indwelling Holy Spirit, suddenly became a vivid reality and in that moment of time, as I put my trust in Him, I was born again and entered into the Kingdom of God. When I awoke the next morning, the experience of the previous night had not faded away; no, it was even more real and I was convinced that at last, at the age of thirty, I had received eternal life and that I would never be the same again.

My life changed so drastically and I was so outspoken about the saving grace of the Lord, that my wife, Martie, gave her life to the Lord soon afterwards. Now I could boldly proclaim: “As for me (us) and my (our) house, we will serve the Lord.” (Josh 24:15)

Soon after I got saved, the Lord called me to resign as a magistrate in the Department of Justice and enter into full-time ministry as a missionary. During the following 34 years Martie (my wife) and I were serving the Lord in one way or the other.

Then, one day, at the age of 65, as I was driving back from Mozambique where I had been reaching out to remote villages, my heart was so filled with the joy of the Lord, that I sang out loud and worshiped and praised Him for about an hour and a half. Then I sensed that He wanted to speak to me, so I kept quiet and waited on Him. His presence became very real and He spoke into my heart saying: “Ben, you have been ministering to the Shangaan people for quite some time. Will you, from now on, give your life that they may be saved?” I drew a deep breath and replied: “Lord, I am not a brave man, but I am willing to go a very long way for their sake and I will trust you to give me the boldness to pay whatever it may cost.” Peace flooded my soul and I knew that my imperfect offer was accepted by Him, the loving Shepherd of my soul.

When I got back to Pretoria, I shared my experience with Martie and, having prayed about it, she confirmed this new calling which the Lord had for us. Soon afterwards we established Rivoni Ministries. (“Rivoni” is the Tsonga word for “Light”.)

We knew of no-one that would support us, so we used what little funds we had saved up and we knew only one person in Mozambique who could assist us to lay the foundation of the new work He had in mind. We also did not know any of the languages spoken in that country. As time went by, the Lord directed our footsteps to achieve our goal of making disciples of the Shangaan people of Mozambique, by the establishing and running of discipleship classes.

Today, some ten years later, Martie and I are still leading the Mission and the number of students attending the classes has risen from naught to 956. It is amazing what God can do with such small human beings, how He simply overrides their weaknesses and failures.

Although we deeply love the Shangaan people and especially our many African co-workers, our FIRST LOVE is JESUS. Do you know that song: “Oh how I love Jesus (x3), To me He is so wonderful … ” Apart from our personal quiet time with the Lord, Martie and I get together every week day to praise and worship Him and thereafter to intercede for those He is entrusting to us.”