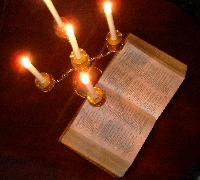 A. THE BIBLE IS A UNIQUE BOOK – THE ONLY BOOK WRITTEN BY GOD HIMSELF

The Bible is the only book in the world of which God Himself is the writer. It is inspired by the Holy Spirit, word by word.

B. IT IS A COMPLETE SPIRITUAL MANUAL

It contains everything which God deems necessary for man to know in order that he may live a fulfilled life, pleasing to God and to the advantage of mankind.

In actual fact it is a library consisting of 66 different books. These have been written over a period of approximately 1535 years by some 39 men that differed considerably from one another, but one thing they had in common, namely their intimate relationship with God. Into the hearts and minds of these men He could infuse His words in order that they, in turn, could convey them to mankind in writing. In this way God made it possible for each one of us to be able to own a heavenly manual for daily living.

The Bible is all encompassing (inclusive). Nothing may be added to Scripture and nothing may be removed from it.

C. HOW DO WE KNOW THAT GOD IS THE AUTHOR (WRITER) OF THE BIBLE?

D. ITS THEME (MAIN SUBJECT WITH WHICH IT DEALS)

The Bible speaks first and foremost of God Who existed before everything else. Flowing forth from that, it deals with mankind that was created by Him, rebelled against Him and is now being recreated by Him. This is what the Book teaches us.

E. SUMMARY OF THE BIBLE’S CONTENTS

Some students may find the contents of paragraphs F up to the end (par I) somewhat boring so let us try to look at it from a different angle.

When I take up a new book to read it, I like to look at the index in front to see what it is all about. Let us do the same; open your Bible at the index and I will take you through the Bible and explain very, very briefly what some of the books are about.

The first book is GENESIS and tells us how God created everything, including man, how Adam and Eve fell into sin and how God made peace with them and how He dealt with their children. Then follows the story of the great flood and how Noah, his family and the animals were saved in a big ship called “The ark.” The next story is of the Tower of Babel which people built to make a name for themselves but God stopped them from completing it by causing them to suddenly speak many different languages; so they could no longer understand one another and dispersed in different directions, those speaking the same languages, grouping together. There we find the answer for the many languages spoken on earth today. Now we get to Abraham. Because mankind was continuing to sin and hating God, He called a man named Abraham and sent him and his family to live in a distant country. From this godly man, He built Himself a fairly godly nation, and much later settled them in a land of their own, called Israel. All this is to be found in the book of Genesis and through Exodus, Leviticus, Numbers, Deuteronomy, Joshua, Judges and Ruth.

From 1 Samuel to the end of 2 Chronicles we find the history of God’s nation, Israel under the reign of their many kings. They did not serve God like Abraham, so God gave them over to a heathen nation that took them away to live in a distant country.

Job is a book on its own, telling of a godly man terribly afflicted by the devil but in the end restored and mightily blessed by God.

“Psalms” contains songs written by people of God, telling of their experiences of life and of God.

The next three books, Proverbs, Ecclesiastes and the Song of Solomon are called the books of wisdom and contain wise sayings like, “Lazy man, go to the ants, see how they work, and become wise.”

Then come the prophetical books from Daniel through Malachi in which are recorded words spoken by God to the people of Israel and to the heathen nations.

Then we get to the New Testament which begins with the four Gospels that deal with the life, crucifixion, resurrection and ascension of the Lord Jesus.

The next book, Acts, is a record of the spread of the Gospel over the known world.

Then we have the epistles which are letters written by Paul, Peter, John and others, addressed to Christian churches and individual people and deal mostly with Christian conduct.

The last book, Revelation, reveals to us how everything is going to come to an end with the Lord Jesus triumphing over the devil and setting up an everlasting kingdom for Himself and his people.

Hallelujah! This is the greatest story ever told and every word of it is true!

Now you can continue with the rest of this page for a more academically layout of the contents of the Bible.

The Bible consists in two parts: the Old Testament and the New Testament.

They are known as the Pentateuch.

Covers from creation up to where Israel is on the border of Canaan.

Was penned by Moses under inspiration of the Holy Spirit.

They primarily deal with the history of the nation of Israel (and with individuals within that nation).

It covers their history from the time they entered into Canaan up to when they returned from captivity.

Job, Psalms, Proverbs, Ecclesiastes and the Song of Solomon.

They are called “poetical” due to their literary style.

Some were meant to be sung.

They deal with man’s spiritual experience.

They cover the life, death, resurrection and ascension of Christ.

Acts of the Apostles.

Covers the outpouring of the Holy Spirit and the worldwide spread of the Gospel.

Contain teaching on God, man, Christ and his work, the Holy Spirit and his work and gifts, the Church, End Times, Christian conduct, etc.

Written by Paul to specific churches.

Written by Paul to individuals.

Addressed to groups of people spread all over the world.

Deal with persecution, false teachers, the supreme authority of Christ and His second coming.

The book of Revelation gives a view of heaven and tells of Christ’s final triumph.