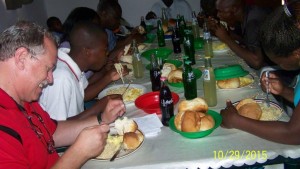 Francois from Rivoni SA, fellowshipping with the Mozambique team.

The earth, on which we are passengers speeding to our eternal destination, has effortlessly completed a complete orbit around the sun since October 2014 and brought us to this moment in time where we, its passengers, are coming in for a landing in December which is only 25 days away and this is our last newsletter for the year 2015.

Though we normally close down our work in Mozambique with a celebration meeting at the end of November, we decided to take down a couple of our Mission supporters at the end of October because, by the end of November they would be too busy for such an outreach, but at the last moment those that were planning to go, found it impossible to do so, so Francois went down on his own for a period of 8 days.
During that period he set his hand to much practical work like replacing water taps and electrical fittings. The voltage in Moz drops so low that the neon tubes cannot light up, so he had to install another type of globe. He also “repaired” the laser printer and re-installed our huge UPS after it was repaired in Pretoria. Unfortunately he could not buy and install a new water tank because the right fittings were unobtainable. On the spiritual side he held a staff meeting from Monday to Friday and attended and preached at the “graduation” celebrations. He returned home exhausted on Monday and on Tuesday I put pressure on him to submit his report so that I can include it in this newsletter for I, in turn, need to be off to Pretoria for an Executive Committee meeting. Rivoni Ministries is a hard taskmaster! (But, as you can see in the photo, he is still smiling.)

Francois has now resigned from his work at Reutech after 25 years of service and has also completed his three subsequent short term contracts with them leaving him free to be more involved with Rivoni Ministries but he will also, sporadically, play a role in other ministries.

DEPUTATION WORK IN THE UK

We are planning for him to go to the UK early next year where the Lord laid it on someone’s heart (Stephen Voros) to present Rivoni’s cause to his local congregation and then do deputation work for us where ever openings may be found with churches. He and Francois will initially be working together to get to know one another and for Francois to impart as much information on Rivoni to him as possible. This really is a wonderful breakthrough for which we have been praying for quite some time since our support base is very small in numbers rendering us open to a serious shortage of funds, should anyone drop out.

INCREASE IN STUDENTS AND CLASSES

The past year has really been fruitful. It opened up with 60 discipleship classes and 60 students and by the middle of September we had 74 classes containing 959 students, an increase of 23% and 30% respectively. Many of these classes were started afresh to replace those of which the students had completed their courses. Some 238 students completed their courses successfully and many more will do so during the next weeks since it is now that time of the year when most classes are ready to do their exams.

Two new discipleship districts have been added to the existing seven. The first one to be claimed for God’s Kingdom was Massingir on the eastern border of the Limpopo National Park which in turn borders on the Kruger National Park where two classes were established and many church leaders enlisted. More recently, three classes were established at Chokwe, a major town in the Gaza province. One of these classes consists entirely of church and community leaders that invited one of our young teachers there because of the good reports they had of his work at Ndindiza. Machaile, deep inland and to the East of Mapai, is also in the pipeline and another village, called Mafasitela, which is half-way to Machaile has already opened up to us. One of our part-time teachers, Amos Chauke will be travelling there from Mapai to present the classes.

At times, during the past year, we really battled with our finances and had to cut on our staff’s already low monthly allowances, but some two months ago the Lord sent an angel to stir one or two of our supporters’ “pap potte” (porridge pots) and some of the overflow spilled into our account. Hallelujah! My heart was stirred by this benevolence and I felt the Lord urging me to let our staff share in it. What we have decided was to give every District Superintendent a small basic bonus for December and merit bonuses based on the number of students to whom they have been ministering, both to them and to the part-time teachers. There is going to be great joy on pay-day this month!

At Philippolis all the students passed their second year course but we decided to cut down somewhat on our work load and have not started with the third year course right away.
A new ministry that was developed this year, is our Afrikaans website “Die Pottebakker” which contains mainly study guides on the Book of Genesis and the four Gospels but also on various topics concerning Christian living. A short story titled “Die Groot Resepteboek,” (The Great Recipe Book) was also written and published. An enormous amount of time goes into these publications but how I enjoy just losing myself in the Word of God for hours on end.

The website has taken off well and a stats counter which we had installed recorded 825 visits to the site and 1823 pages visited over the past 3 months and is being read in SA, the UK, the USA, Namibia, Japan, Brasilia, Germany and by means of satellite. (We have to take a look at the stats counter since it sometimes seems to stop for a while.)

Some three days per month go into the gathering in of local news and publishing of an Afrikaans news bulletin which we started, titled “Philippolis Nuus.” It is published both on paper and on the web by means of our website. It always also contains a message from the Word. This is a bit of a thorny ministry since one sometimes has to tread on toes, reporting on happenings that people would have preferred to be kept quiet. Since I never had any training as a newspaper editor or even as a reporter, I sometimes feel quite out of depth with no-one to turn to for advice.

On the personal level, bad news: notwithstanding all our efforts, Martie and I are losing the battle of the years. Why did the Lord not have Caleb’s recipe of eternal youth jotted down at the bottom of the page where his exploits were recorded? Did he use special herbs, take a nap during lunch time, exercise before daybreak? Martie’s knees have become stiff and painful so that she cannot go for brisk walks as she did before. As for me, my cycling performance is down by at least 15% and motivation by 30. It is no longer fun as it used to be. I did not do the Mangaung 108km Classic on 1November and I did not enter for next year’s Cape Argus. Nowadays the wind is too strong, the cold too severe, the heat too intense and in whichever direction I ride, there are 5 up-hills for only one down-hill. “Oh what a wretched man I am! Who shall deliver me from this body of death?” (Rom7:24 irreverently quoted and applied out of context, but I know the Lord understands my gloom.)

Let us look at just two of the “graduation” ceremonies held recently. Angelina Ntila was one of the second year graduates at Muzunguya -Belem and testified saying: ” I have been a Christian for so long, but I knew nothing about the overcoming of trials and temptations. I used to “divorce” my husband every now and then, almost every day. I was a person returning to my parent’s home, then coming back to my husband ever so often. Five times I attended court cases against my husband, five times. Then things changed when we studied the Rivoni Ministry lesson on how the Lord Jesus was tempted after 40 nights and 40 days of fasting and how He overcame the devil, simply by applying the Word. That was when I surrendered my will to Him and since then I am at peace with my husband. Thanks so much to my teacher, sister Gloria and the Rivoni Ministries.”

After returning from a graduation ceremony at a village called Tomanine where Titus Chauke (far right) was the teacher and where 28 students received their certificates, Baloi submitted a photo together with a summary of his sermon saying: “At Tomanine graduation I preached both to the church at large and to the graduates. I spoke about excelling and maximizing in God’s Kingdom because life is temporary. We must serve God with all our efforts , with all our hearts and with all our might because we are just passing through. Serve God this year, because next year is uncertain; serve God today because tomorrow is uncertain; repent now because later on is uncertain, …” “Whatever comes to your hand to do, with all your power do it,.. “ . (Ecclesiastes 9:10)

BLESS YOU FOR YOUR SUPPORT!

In closing: thank you so much for your prayers and financial contributions. There are several supporters that contribute anonymously whom we are unable to thank personally, but God knows who you are and may He reward you abundantly. The following such donations were received: 2015-09-27, 3rd of … payments; 2015-09-28, Vereffen Rivoni; 2015-10-31, vereffen Rivoni.

Have a blessed festive season ,