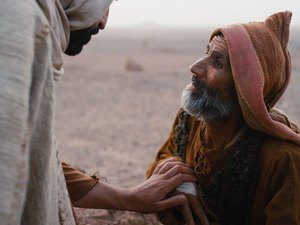 A. JESUS HAS COMPASSION ON ALL OF MAN’S HURTS

The Lord Jesus did not come in the first place to heal people, but to restore their relationship with God. He came to heal sick hearts and not sick bodies. Nevertheless He had great compassion for all who, on account of illness, endured pain and suffering and He never turned away any such who sought His help.

In this passage of Scripture we read about a man who had leprosy and came to Jesus to be healed. Leprosy is a horrible illness. Some types of leprosy have lumps and thickenings under the skin of the body and particularly of the face, including the ears and nose. Sometimes open sores develop, particularly on the hands and feet. These would have a bad smell, and if not treated properly, may cause the loss of fingers or toes because of infection with ordinary germs. It can be so repulsive and upsetting that one would not want to look at someone with leprosy, and he would usually cover himself with a cloth.

On top of this, it is contagious, so that other people would not come near a person with leprosy and they would even drive him out of the community. He would then live completely alone, out of town. According to the law of Moses, a person with leprosy was regarded as spiritually unclean and was not allowed to live amongst God’s people. We read the following, for example, in Lev 13:45,46: Anyone with such a defiling disease must wear torn clothes, let their hair be unkempt, cover the lower part of their face and cry out, ‘Unclean! Unclean!’ 46As long as they have the disease they remain unclean. They must live alone; they must live outside the camp.

C. THE POOR, HURTING,CAST OUT MAN CAME TO JESUS TO BE HELPED

That was the tragic situation of this man who came to Jesus. How he managed to approach Him without someone stoning him to death, was itself a miracle. But nevertheless, if someone really desires to come to Jesus, God creates an opportunity. Someone has said that a seeking sinner and a seeking Saviour will always find one another.

When he saw Jesus, he fell on his face and cried out, “Lord, if You will, You can make me clean (heal me)!” In his words and his conduct we see faith and humility. We see also a strong desire to be healed spiritually, because he asked Jesus to cleanse him, not just to be healed. He wanted to be thoroughly cleansed and made new, so that he could even go to the temple to bring his offering and then to live amongst God’s people.

C. JESUS DID NOT SHAME HIS FAITH

How did Jesus respond to his cry? He stretched out his hand to this rejected man, caught up in pain and suffering, and said to him, “I will, be clean.” Jesus never evaded sick and sinful people; when they called to Him, He turned to them immediately and paid attention to their needs and requests.

When He said: “I will; be cleansed”, the leprosy left him and immediately he was totally cleansed (healed).

D. RESTORED AND RE-INSTATED IN SOCIETY

That was not all; Jesus commanded him to do as was written in the Laws God gave to Moses. He was to show himself to the priest so that he could examine him. Then, if the priest declared him clean (healed), he was to bring the prescribed thanks offering to God.

Oh, the love and mercy of Jesus. The man who had suffered so much, now seemed to be created anew. His body was restored, the bad smell was gone and the rags he wore he could burn and dress in a new robe. He was no longer ashamed to appear in public and could mix freely with the crowds.

E. THE CURSE OF SPIRITUAL LEPROSY IS STILL WITH US

These days we see much less of leprosy, because there are institutions where leprosy is treated and even cured. The spiritual leprosy of mankind, however, is still just as bad as ever, even amongst VIPs (very important people). This inner uncleanliness presents itself as inhumane cruelty, sexual impurity, drunkenness, dishonesty and much more. A stench of spiritual putrefaction issues from our society and is often reported on in the media.

But there are also those that are taking a good look at themselves, acknowledging their state and having a deep heart-felt longing to be cleansed. Such discover that the Lord Jesus can just as easily cleanse them from spiritual filth and desease for He bore our guilt on the cross: 1 John 1:9: If we confess our sins, he is faithful and just and will forgive us our sins and purify us from all unrighteousness.

The cleansing from sin is an ongoing work of the Blood and the Spirit so that the person’s longing to walk in cleanliness may be fulfilled.

F. EVEN TODAY, WE STILL NEED GOD’S TOUCH ON OUR BODIES

Jesus can of course also heal our bodies. Once you have surrendered your spiritual life to Him, trust Him also to heal your bodily ailments, because there are so many diseases and chronic sicknesses that medical science has no answer for, but for God who designed and made our bodies, this is no problem.