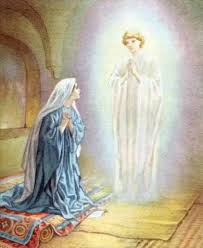 A. MAN’S NEED TO BE RECONCILED TO GOD.

God set His plan of reconciliation in action by sending a heavenly messenger, an angel, to inform mankind of what He was going to do.

C. LUKE 1:27: GOD USES A HUMAN BEING AS HIS INSTRUMENT TO BRING SALVATION TO HUMAN BEINGS

He used a human being to carry out His plan, a young girl; not a girl from a rich or important family; not an exceptionally pretty or intelligent girl, but just an ordinary girl like might be found in any of our streets or villages.

She grew up not knowing that God was going to use her in a special way, yet she kept herself pure; she was a virgin. She was certainly old enough to marry, had decided to do so and was engaged to a young man. He too was an exceptional young man because he did not insist on having intercourse with his betrothed but bridled his desires until the day they would be married. They knew that God wanted it to be like that and God’s will was more important to them than their own natural desires. They said to one another: “We will not give in to the devil’s temptation to do what other young people are doing. We will keep ourselves pure.”

The girl’s name was Mary and it was her who God saw when he looked down from heaven to see who He could select for His work. It was she whom He chose and to whom He sent His angel. Notice now what the angel said to her: “Greetings, you who are highly favoured! The Lord is with you.”

Do you think the Lord would say this to a girl who had lived a loose life? Do you think that God would have chosen a prostitute to be the mother of His Son? Certainly not! Yes, we all know that nobody is completely pure and holy as God is, but, if we hate sin and ask the Lord to give us the power to live a clean life, He notices it and favours us. Then, we too, hear the voice of His Sprit in our hearts, saying, “Greetings, you who are highly favoured! The Lord is with you.”

But there is more good news: no-one who went astray in his or her past life, needs to feel “It is all over for me; I lived a life of sin, now God has no use for me”. No, He is the God of a second chance and has wonderful plans for your future. All you need to do is to turn to Him with all your heart as a woman called Rahab did. She was a prostitute living in a heathen country, but when she heard of the one true God, the God of Israel, she believed in Him and gave her life to Him. He accepted her, brought her over to His people, gave her a husband from amongst them and from her descendants, Jesus was born.

What was Mary’s reaction? She was scared and asked herself: “What is happening to me? Why is an angel appearing to me? Am I going to die?”

People are continually plagued by fear. When something unusual happens, they see it as an omen that something terrible is going to happen to them. God was aware of this, and by His angel He immediately put her at ease by saying to her, “Do not be afraid, you have found favour with God.”

It may be that you have suffered much at the hand of others and that is why you are so fearful. Obviously there are many bad people in this world, but God is greater than all of them, and we must entrust our lives into His hands. In Heb 11:6 we read that we must believe that God exists, and that He is the rewarder of those who diligently seek Him.

This is what Mary also discovered; that God was wanting to bless her. How did He want to bless her? He wanted to use her in a unique way in His Kingdom, and would in the process, give her a little baby boy. Most young girls want to have babies. In Mary’s time, bearing a son was of special significance since he would become the heir of that home, which would also bring much joy to the father. But this would be a very special boy because He would be called the Son of the Most-High God. What is more, He would be the king of an everlasting kingdom. Wow, what a fantastic promise for an ordinary girl to receive, that she would give birth to a king, a king who would be no less than the Son of God, a king who would have his own kingdom and would reign forever, and therefore would Himself live forever! What a special boy this would be!

The angel’s words must have set her head spinning, leaving her speechless, unable to understand how it could be possible. Above all, she probably could not grasp why God had chosen her to be so privileged.

Suddenly another thought occurred to her: how could it happen, because, in order for a child to be born there would need to be a man with whom she could sleep to receive his seed. Never ever had a woman given life to a child without her being impregnated by a man. She braced herself and voiced her question to the angel: “How can it happen as I do not have a husband?”

Many people go around with questions in their hearts concerning God and His words as recorded in the Bible. These thoughts lead to unbelief with the result that they never participate in His blessings.  They are like the waves of the sea that are blown this way and that by the wind.

What then must we do when doubts arise? We must do what Mary did: she brought her uncertainty to God’s messenger: “How can this happen if I don’t have a husband?” It was a logical question and did not come from any rebellion against God. Immediately she received His answer: “The Holy Spirit will come upon you, and the power of the Most High will overshadow you. So the holy one to be born will be called the Son of God. … For nothing is impossible with God”.

What the angel in essence said was: “Mary, you are absolutely correct. Humanly speaking it is impossible. A woman cannot be impregnated in any other way but by a man, but God can do anything that is impossible for man. This pregnancy will be a work of the Holy Spirit. His power will overshadow you. He will implant the seed in you and it will grow into a living Son”.

Are you confronted by questions to which you have no answer? Do what Mary did. Don’t discuss the problem  with other people like yourself, because they in turn will have no answer. Share your problem in humble trust with Him and He will definitely solve it.

Perhaps you are saying, “It is easy for a woman to act in this way, but I am a man, I am supposed to be strong and ready to come up with answers to all problems. What will people think of me if I kneel down and pray?” Great and strong men have discovered that when they humble themselves and pray, they become greater and stronger themselves and are used even more by God. God honours a humble man and lifts him up, but He hates the proud and humiliates him into the dust.

All that was left after Mary’s question had been answered, was for her to say yes to the angel so that he could take her answer back to his Master. The Lord does not use us against our will. No young girl has ever woken up one morning to find that she got pregnant supernaturally.

Mary obviously realised that this child would bring, not only joy, but also pain and grief. She was indeed engaged and what would her fiancé, Joseph, have to say. Would he believe this story, that her pregnancy was the work of the Holy Spirit? Oh no, he would presume that she had been unfaithful to him and would reject her. What then? Her family, father, mother, and other relatives who were upright people, would also reject her. She would be landed in a scandal. Where would she turn? These were the challenges staring her in the face. But she trusted God. She believed that His will was best for her and therefore she submitted herself willingly to Him. This was her answer: “I am the Lord’s servant. May it be to me as you have said.” Then the angel left her.

I. ISA 9:5: PROPHECIES FROM THE OLD TESTA-MENT

Now let us focus on the Son that was to be born. His birth had been prophesied hundreds of years before by various prophets, especially by Isaiah. This Son would be born in human form at a certain fixed date and time and would be the Almighty God, one with the Father and the Holy Spirit and would have no beginning and no end because He was God.

“For to us a Child is born, to us a Son is given, and the government will be on His shoulders. And He will be called Wonderful, Counsellor, Mighty God. Everlasting Father, Prince of Peace.” (Isa 9:6).

In Hebrews 1:8 the following is written concerning Him: “… Your throne, O God, will last forever and ever: and righteousness will be the sceptre of your kingdom.” Yes, Jesus, the Son of God, is equal with God the Father and with God the Holy Spirit. Because He is God, He is Holy, absolutely pure, uncontaminated by any sin of His own, and because of this He could come into this world as the spotless Lamb, sent from the Father, to take our sins upon Himself.